Serotonin is involved in mood regulation. Serotonin transporters are crucial to this job. The serotonin-transporter gene comes in two functional variants—long and short. The long one produces more transporter-protein molecules than the short one. People have two versions (known as alleles) of each gene, one from each parent. So some have two short alleles, some have two long ones, and the rest have one of each.

via The genetics of happiness: Transporter of delight | The Economist.

and fantasy as well. And a little bit of vampires and zombies too.

Does TV still rot your brain?

(2010) Much happiness due to the growth in number of character driven plots. Great pain, when studio heads have zero patience with story arcs unfolding over several years, thus needing interesting characters and not just great CGI/SFX.

Though… (Feb 2017) the past years it has felt, as if most chances taken are with content topics, and not really with story and character development. Can’t really think of a series that really really touched me. Drama tear-jerking, sure. Believable HUMAN characters like in Sense8 or conflicts like Dark Matter and politicising conquest of near space in the Expanse. But any real depth to the whole of the series? No, sadly, no. Its all just story developing, which – when it’s okay – has simply avoided the most obvious of dramatic clichés and pitfalls. Finding the right bell to ring within the audience seems more important than telling a real story, so… often a steady and predictable decline from season 2. Do you disagree?

End of May 2020: I’m somehow looking forward to the first series (befitting of the present list), which clearly shows the effect of the Corona illness and the resulting social, economic etc. effects. So far all series on this list belongs to the world “before” – no social distancing, no problem that cannot be solved. Let’s see, how they do it.

Titles in red are shows with time travel elements, which are of particular interest to me; embedded links here lead to wikipedia pages. At the page bottom is a list of series, I have yet to see, among these more than a few time travelling pieces 🙂

Visit CancelledSciFi to see if your favourite is sinking or swimming…

I never understood
what this art thing was about
having been raised among books
two three four decades old
written for children I thought
the world ought to be
a safe place
and then I realised the world
is never safe if you think it is
this is where this art thing
comes in
you see
you have to make it safe
nobody cares how you do it
you just have to make it safe
and it seems
art is a bit like a lottery
there is a prize
and you go for the prize
and if you win
people listen to you
and you make the world
a little bit safer
because they trust you
not because of what you say
but because they trust you
you won this prize you see?
its an okay system
except when
the prize is not really a prize
but a wall
to prevent you
from seeing the real prize
you and everyone else
which wont be about money
but something else
something everyone needs to see
but somebody wont let you
so you have to climb the wall
while pretending
to streeeeetch on tiptoes
to reach the prize
and quite possibly
you cannot win the prize
when you have told
what is on the other side of the wall
at least not for a while
as everyone gets used to
what is on the other side
and then
for a while you can relax
if you want
and stay on the ground
and just pick at the prize
like your neighbour’s apples
hanging over the fence
and its okay
for a while
and then they become boring
and all the same
this is where art begins
I now realise
you don’t actually have to
eat all the apples
if you don’t like apples
its just an example 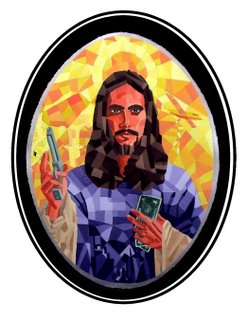 All is right with love and Gunney