This is another worthy volume of SF gathered away from the beaten track from Denmark’s Science Fiction Cirklen. Their previous collection I reviewed a few years ago (Creatures of Glass and Light) that sprang out of Denmark hosting that year’s Eurocon (European SF Convention) and was an anthology of European SF short stories. Now (2011) SF Cirklen have given us a window into Denmark’s own contemporary science fiction short story scene and as such will be sought by those who are die-hard serious SF reader with a passion for the genre.

The volume includes a short, non-fiction article by Niels Dalgaard that presents a summary of the history of Danish SF which itself will be of interest to those non-Danes with both a casual passing interest in SF beyond their own country as well as those whose study of the genre is more scholarly.

First though a word about the book’s publication details as these are not as clear as they might be. My understanding, and I checked with the publisher for this review, is that this volume first came out in 2010 printed in Danish with an ISBN 978-8-790-59248-6 and these are the details given on the inside front (copyright) masthead page of this English language volume. However this English volume came out in 2011 and (according to the accompanying press release) has a different ISBN 978-8-771-14158-0 (which is not the one on the masthead or back cover bar code). Now, I mention this not only because those who send us review copies like us to get the publication details right, but also because we are aware that the SF2 Concatenation site is occasionally used by those studying the genre for arts courses, as well as because you may want to buy a copy, and the last thing you will want (if you do not speak Danish) is the original edition as opposed to the 2011 edition in English. Translation volumes are a nightmare to produce and in this case we are told that another publisher (effectively acting as producer and distributor) took over the printing and much of the distribution with SF Cirklen doing the commissioning and copy editing. The good news is that this other publisher (BoD) provides print-on-demand copies in Great Britain, Germany, Canada and the US. Hopefully that explains everything, so let’s move on…

This book came about as part of a very laudable goal of the Danes wishing the rest of us to have a taster of what they were producing. SF Cirklen does, and has for each of the three years up to and including 2010, ran an annual short story competition with the best getting published in a paperback anthology. The first two of these anthologies were called Leige Under Overfladen [Beneath Surface] (2007) and I Overfladen [The Surface] (2008) and the stories in Sky City (2010/2011) are taken and translated from these two earlier anthologies.

Before getting on to the stories, potential readers will want to know about the quality of translation. Translation between languages is extremely difficult. Professional translators are expensive; so much so that even major fiction publishing houses in developed markets, such as Britain’s, do not always use the professionals. Furthermore, it is nearly always (but not absolutely always) best to use a translator whose first language is the language into which the translation is being made. Failing to follow these two general rules of thumb can result in trouble. Indeed a number of SF translations of non-Anglophone fiction into English that I have come across from various countries in my time have been truly horrible: one country is particularly bad and I have yet to come across an SF anthology (having tried to read four) from that nation that is not so awful that the stories are impenetrable. So it was a little worrying when before reading Sky City I noticed that the translations were undertaken by different Danes. Having said that, I was hugely relieved to find that all the stories were translated into quite a readable standard of English with only the occasional awkward use of phrase or opaque sentence: Science Fiction Cirklen is to be commended. In fact the only thing that leaps out at you is the non-standard (non-Anglophone) use of speech inverted commas but this the reader can easily ignore. Less prominent is that the anthology is written in a mix of English and non-English North American, and sometimes both English and American English are used in the same story: someone at SF Cirklen needed to set their PC Word.doc program language to one or the other (English as written in England as part of Europe would probably have been the more appropriate). However this last is a minor point. For the most part the quality of translation is sufficiently good for readers to follow, and indeed enjoy, the stories on offer.

As for the stories themselves, I was personally pleased that they were all science fiction and not fantasy that does seem to dominate a lot of Eastern European speculative fiction and even sneak into some major annual US anthologies that purport to be SF. (Logical genre nomenclature determines that fantasy and science fiction are sub-genres of speculative fiction: fantasy, though worthy, is not a logical sub-genre of science fiction even though some consider it to be so and, of course, not withstanding the fantasy-science fiction overlap of science fantasy where the fantasy (such as a super alien from planet Krypton) has its rationale explained in completely fake science (the alien gets his powers from our yellow sun).)   Sky City’s stories are firmly science fiction.)

As for the stories themselves, as would be expected, they use a range of the genre’s established tropes. Here is a brief teaser run-through without spoilers:-

Sky City by Manfred Christiansen. A woman wakes up in a tall skyscraper built by nanobots. Do they want something with her? This is the title story for the volume and sets the anthologies tone.

Departure by Niels Gerloff. A research team on Europa prepares to boldly go…

The White Bear by Richard Ipsen. A tale set in a future China.

The Last Astronaut by Flemming Rasch. An astronaut lands on a distant planet after a journey of hundreds years. The next day another ship lands and a fourth generation descendent of the first astronaut steps out…

The Organism on Maneo by Morten Brunbjerg. On a spaceship a crew member discovers an unusual creature…

The Tourist by Patrick Leis. A military officer is questioned as to why he authorised an attack in a civilian area of his own country. The motive is obscure and further investigation leads to the unbelievable…

Know Your Target Audience by Dan Mygind. A new way of getting audience feedback help tailor programme makers’ efforts which in turn feedback to the audience. But the result is not quite as expected.

The Red Parakeets by Camilla Wandahal. Future genetic engineering is not just controversial, it splits society…

The Short Arm of History by Kenneth Krabat. They were queuing up to enter the portal to who-knows-where… This story is vaguely (only ‘vaguely’) reminiscent of Pohl’s novel Gateway (1977), and there is nothing wrong with that as you should not keep a good SFnal idea down and this variation of the theme is an interesting one.

A Contribution to the History of Denmark by Soren Hemmingsen. In 1961 an expedition to Lapland in search of minerals found the tail of a frozen dinosaur… This is the story of the days that followed.

When the Music’s Over by A. Silvestri. A spaceship lands in Central Park. What do they want..? Now without wishing to introduce a spoiler, I was surprised at the aliens distain for the character Captain James T. Kirk. After all this is a Danish anthology and Denmark is famous for its bacon, whereas William Shatner is known for his ham… (Groan now if you will.)

The E-Puzzle by Nikolaj Hojberg. In the far future questions of soul and death will be answered, but then how will we deal with mortality and, as important, how might we cope with the afterlife?

Leeding, Feeding by Miriam Pederson. An alien dissection, but ultimately who is studying whom?

You are my Best Friend by Camilla Friis. We all need friends. But what are friends?

Dreams of Stone by Brian Ornbol. The city was big. I mean really big. You may have thought it a long way down to the chemist but the city really was big… Now this tale is very reminiscent of one I first read back in the 1970s (when Brian Ornbol was just beginning to go to school) and I am sure I have read it a couple of times since in different anthologies (it was a good story), but for the life of me I cannot recall where but the followers of SF Signal tell me it could be ‘Concentration City’ by J.G. Ballard). Nonetheless, as with ‘The Short Arm of History’ above, a good idea can always be revisited, and maybe it was Brian Ornbol’s first encounter with this idea.

The Green Jacket by Gudrun Ostergaard. Thirteen year old Ivara has more than everything she can want but has not seen the world beyond her tower city. So she decides to have a look.

In the Surface by Sara Tanderup. A tale set in a future where the sea covers the planet.

Interrogation of Victim No. 5 by Lars Ahn Pedersen. The patient is questioned as to what happened to her… and then the patient realises…   This story is one of the best in the anthology and was a good note on which to end.

To be honest, none of the stories would likely to be professionally published in the west as they are presented here. Nearly all of the writing could be tightened; in a short story every paragraph has to work propelling the story along and some of these stories were way to long. Story endings also need thought; a good central plot is not sufficient by itself as the reader needs to be given a sense of completion if not story fulfilment. Having said that, a few with minor tidying and a clean up of the English, would not be out of place in a professionally published anthology. Very encouraging is that some of the authors are young: in their 20s or 30s. This is good news for Danish SF and it will be interesting to see if any in the future make professional sales in Britain (or North America). Science Fiction Cirklen is to be congratulated for enabling those of us outside of Denmark to get a taster of what those Danes are up to these days.

We also have much else in our autumnal edition (volume 25, No 5)
http://www.concatenation.org/whatsnew.html

Including a big news page
http://www.concatenation.org/newsindex.html

which also has much Eurocon news
http://www.concatenation.org/news/news9~11.html#eurocon11

There is also a separate, stand-alone review of Scandinavia’s Eurocon this summer
http://www.concatenation.org/conrev/eurocon11.html

“Anything you can do to spread the word  and links of this edition to appropriate Scandinavian blogs and SF news sites would be very welcome.” JC 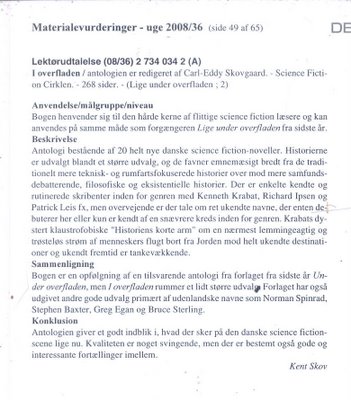